The Dunes Trail has made quite an impression since it was officially opened in mid-2012. It’s now journeyed by around 20,000 cyclists per year, plus many walkers and runners. Intrepid travellers, fitness enthusiasts, families, a Thursday-evening ‘bike, beer and BBQ’ group, youth groups, motorhomers, e-bikers, hand-bikers – they’re all out there enjoying it. Trail counters confirm usage is growing each year.

It’s not just a numbers game, either. Like other trails in special places around New Zealand, Opotiki’s Dunes Trail has clearly captured a lot of hearts.

The easy-rated trail is one section of the Motu Trails which, in turn, is one of the 22 Great Rides on Ngā Haerenga, The New Zealand Cycle Trail. The other sections of the Motu Trails are the historic Motu Road, which stretches a hilly 68km from the Dunes Trail to Matawai; and the advanced-grade Pakihi Track, an epic 20km that wriggles down through jungle forest, back to gravel road in the hills south of Opotiki. 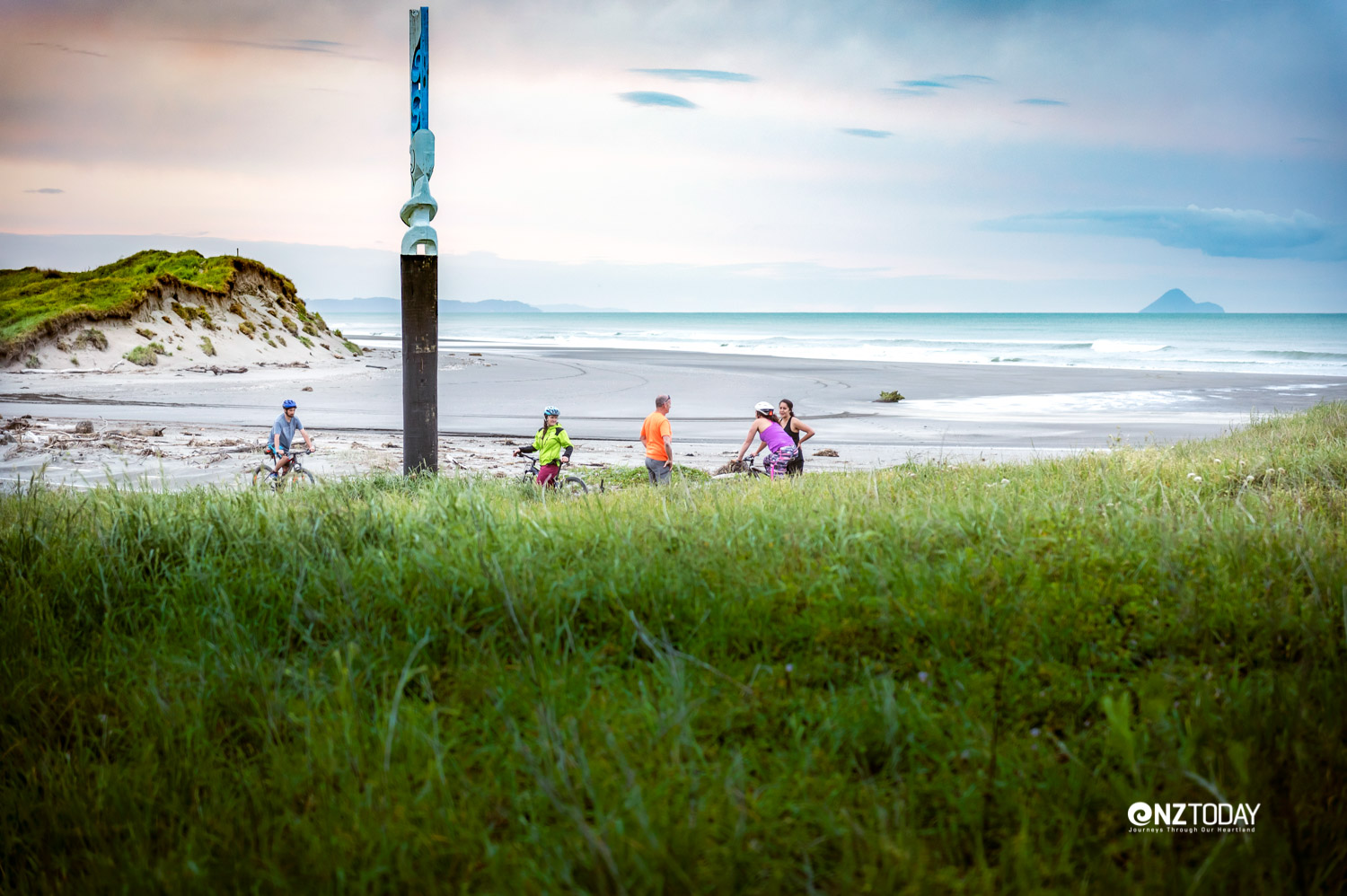 And there’s more: at Matawai, the Motu Road connects with Rere Falls Trail, which is a back-country road ‘Heartland Ride’ that heads east to Gisborne via picturesque Rere Falls, adrenalin-inducing Rere Rockslide, serene Eastwoodhill Arboretum, and vineyard country. Bike-packing enthusiasts regularly clock up hundreds of kilometres riding Bay to Bay, then back or onwards to Lake Waikaremoana or around East Cape on SH35.

At which point let’s gently apply the brakes: there’s more than enough for one story in the Dunes Trail alone.

Opotiki is 40-minutes’ drive from Whakatane, and one-and-a-half hours from Tauranga, Rotorua and Gisborne. You start at Memorial Park, at the north end of town. There’s Motu Trails signage, parking and a shelter with carved pou, but the biggest impact is in an 80-metre suspension bridge crossing high over the Otara river. This is Pakowhai ki Otutaopuku bridge, reflecting the name of the area each side. Pakowhai was the original village here, long before Opotiki; Otutaopuku refers to a distant battle.

Cross the bridge and there’s 800 metres of stopbank before you head into the dunes proper. From here, the style of riding is set: pedal harder up the incline of a dune, roll over the top, then coast down the other side. Pedal, roll and coast. Pedal, roll and coast. The rises are never long or steep, but their regularity means the Dunes Trail does require a bit more energy than riding, say, the flat of Hawkes Bay Trails. No surprise, the Opotiki dunes are popular with e-bikers. 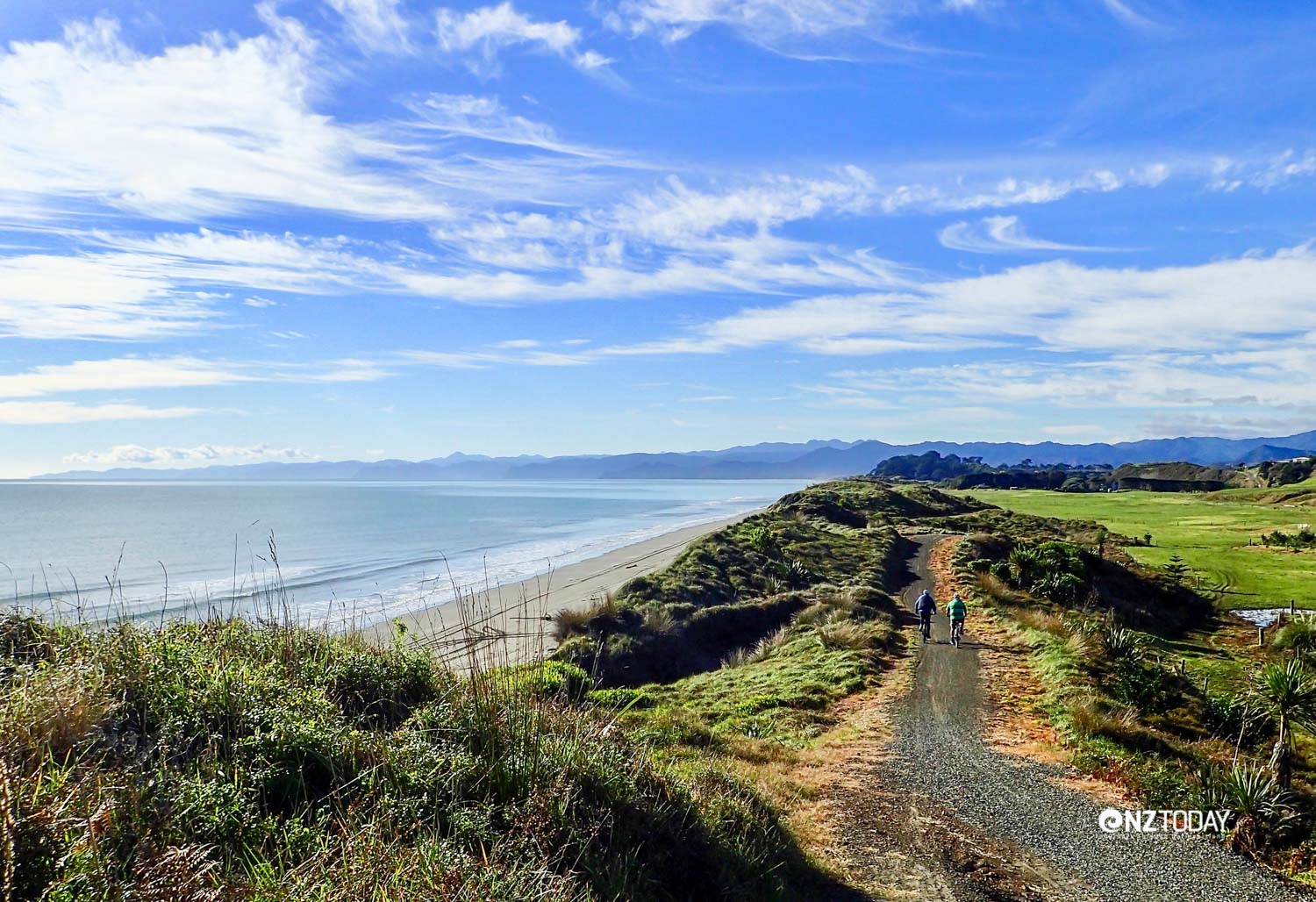 A kilometre in, you pass a couple of trail-side displays that use old concrete culverts as plinths, topped with ceramic bird tiles showing weka, pied stilts and other species of the area. The culverts are a nod to the concept of reusing materials wherever possible, the tiles are made by local potters Margaret and Stuart Slade, who in 2018 were awarded QSMs for their conservation efforts at Nukuhou Saltmarsh on Ohiwa Harbour. They’re also regular Dunes Trail riders.

At two kilometres, bench seats sit on a panoramic viewpoint. It’s well worth pausing here – many do – and taking in the sweep of the Pacific. To the west, there’s the headland of Kohi Point, beyond which is Whakatane and Moutohora (Whale Island), a wildlife reserve. To the north, the active volcano Whakaari/White Island, typically with a cotton wool puff of steam. On a calm day there’s likely also the dot of a mussel harvesting boat, servicing the many kilometres of off-shore mussel lines that are surely a big part of Opotiki’s future. To the east, the high inland ranges of the Raukumara, fading in the distance towards East Cape. In the immediate foreground, the rhythm of waves on an empty beach.

To read this and other articles on the NZ Today website please click here to sign up for a membership. Once a member and logged in, you'll be able to read all the articles on the site.