Just the mere name suggests a religious back-story. After all, St Mary remains the most venerated of all the Christian saints.

But strip away the neighbourhood’s deeply religious name and you find a suburb with a past often dominated by sly boozing, prostitution and drugs, before emerging from Greater Ponsonby to become an exclusive enclave on the north facing slopes of the Waitemata Harbour near the Harbour Bridge.

Pompallier first came to New Zealand in 1838. He was present at Waitangi on February 6, 1840, but went back to France in 1846. He returned in 1850 accompanied by eight Sisters of Mercy from the Irish town of Carlow. They were the first religious women in the young colony.

Originally the sisters worked as teachers in the area where St Patrick’s Cathedral now stands in central Auckland. Then in 1853 Pompallier bought land on a hill about two kilometres to the west.

He named the hill Mount St Mary’s and set about establishing religious institutions. A convent, school and chapel had been built by 1865.

To read this and other articles on the NZ Today website please click here to sign up for a membership. Once a member and logged in, you'll be able to read all the articles on the site.


The chapel – made of kauri and designed on Gothic lines – still stands today in the grounds of St Mary’s College, one of Auckland’s premier schools for young women. 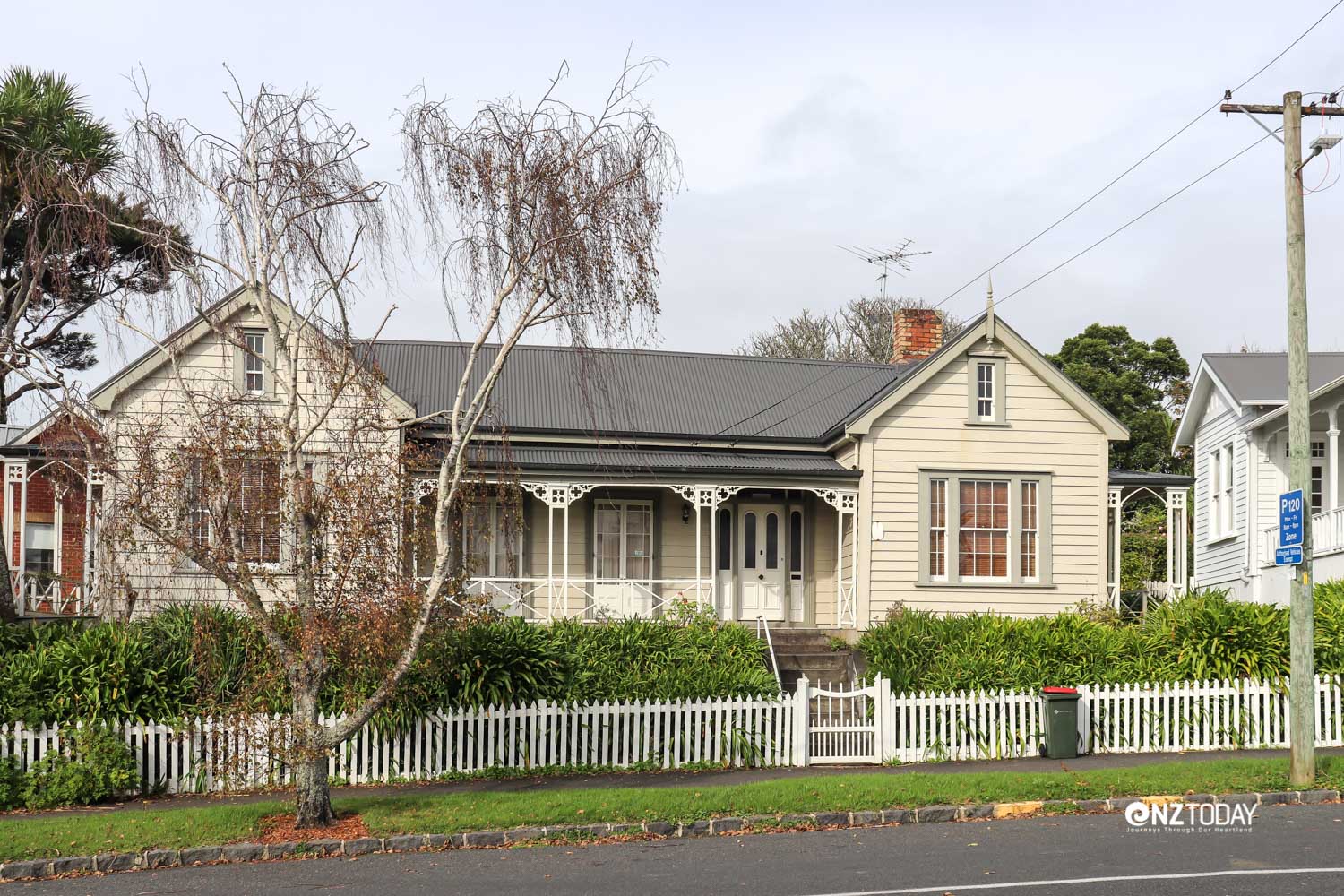 One block over, on what became St Mary’s Road, Pompallier had the first Bishop’s residence built. The house is still there today, just over the back fence from the grandiose Bishop’s Palace that followed it as the Bishop’s home.

The upgrade to the new residence was arranged by one of Pompallier’s successors, John Edmond Luck, who became Bishop of Auckland in 1882. Luck engaged the sons of the famous English Gothic revivalist architect Augustus Pugin to design a significant building befitting such a distinguished church leader. It opened in 1893, and while the current Bishop, Patrick Dunn, still lives there the expanded complex now serves as the administrative headquarters of the entire Auckland Catholic Diocese.

Around the time Pugin & Pugin’s design was being constructed, another building destined to be a landmark in the area was commissioned for use. It’s the original Ponsonby Fire Station, now at 13 St Mary’s Road. Followers of the TV series Nothing Trivial will recognise its exterior as the place where all those pub quizzes happened.

The fire station, with its old lettering still decipherable on the façade, ceased being a functioning fire station in 1923. For over 50-years it was home, at various times, to a tea merchant, a piano tuner, office furniture manufacturers and a variety of importers.

Since 1980 it has hosted a series of restaurant ventures, most notably as the famed Japanese restaurant Soto and more recently as the trendy breakfast and lunch café Mary’s.

But there remains a time in its history where no tenant is noted – from 1964 to 1969. In that period, which included the final years of our draconian 6 o’clock closing, the fire station was renowned as a beer house and brothel. It’s where underworld figures, and others enthusiastic about breaking the liquor laws of the time, would gather of a night to drink and be entertained by prostitutes. Among the regulars, so legend has it, were the convicted Basset Road machine gun murderers Ron Jorgensen and John Gillies, as well as Archie and Kitty Banks, the parents of a future Auckland mayor and MP, John Banks.

The old fire station wasn’t the only brothel in St Mary’s Bay during the 1960s. In fact, Flora’s place had been going since the Second World War around in nearby Ring Terrace.

Flora McKenzie, born in 1902, was the daughter of a prominent Auckland farmer and businessman. He bought her some flats to rent out at 17 and 19 Ring Terrace in the early 1940s. She’d been a successful dress designer and maker but was also an alcoholic.

Flora soon realised that many of her tenants were good time girls entertaining American servicemen based in the city in the latter years of the war. After the Americans left, Flora’s premises developed into the equivalent of an exclusive gentlemen’s club in a discreet and hard to find street.

The activity was of course highly illegal. It was also famous. Despite Flora herself appearing in court on brothel keeping charges six times and going to jail twice, the business remained operational until the early 1970s when “massage parlours” took over the sex industry.

Flora, who liked to describe her business as “sex therapy”, died of cirrhosis of the liver in 1982. These days Ring Terrace properties with their spectacular harbour views are tightly held, and nothing will sell there for less than two million dollars. The street’s most famous current resident is Winston Peters.

So with sex and booze having been an integral part of St Mary’s Bay history, it only stands to reason that there should be some drugs and rock’n’roll too.

That was provided by the residents of the infamous ‘Mandrax Mansion’ at 87, St Mary’s Road. In the late 1970s and early 1980s, the late Dave McArtney and Graham Brazier of Hello Sailor fame lived at the old house, so named because of the quantities of qualudes or mandrax that were consumed there. The Hunter boys, Todd and Marc from Dragon were also occasional residents. The address is only a few hundred metres down the hill from the former Gluepot Tavern, one of the most famous live music venues the country has known.

But between the Mandrax Mansion and the Gluepot sit two of St Mary’s Bay’s most imposing landmarks – the Leys Institute and the old Ponsonby Post Office.

The Leys Institute, a library and gymnasium complex, was a gift to the city by William Leys and his brother Thomson. William, who was a bookbinder and not a wealthy man, died in 1899, but specified in his will that he wanted his estate to help fund an institution to “promote literary culture” and to “advance the intellectual development and social welfare of the community.”

His brother Thomson, co-owner of The Auckland Star newspaper, contributed some money to ensure William’s wish became a reality and the first part of the Leys Institute, a building with a library and meeting rooms, opened on St Mary’s Road in 1905. A gymnasium next door was finished the following year. More than a hundred years on, both institutions are thriving.

The contribution of William Leys in another sphere should not be underestimated either. In a speech in 1893, he suggested the idea of an old age pension to “all colonists aged 65 or over who had been in New Zealand 25 years.” His suggested sum was ten shillings a week, or one dollar. The Liberal government of Richard Seddon passed the Old Age Pensions Act five years later.

Only a stone’s throw from the Leys, across the road and up at the corner sits the most imposing building in St Mary’s Bay, and one of the most striking in the country. It’s the old Ponsonby Post Office, not used as such since 1984, but much restored and much loved.

It was built in 1912 with a clock tower added the following year.

Rogernomics attitudes ensured it never had a chance as a post office after 1984. Thankfully the Historic Places Trust and Heritage New Zealand ensured that the “elaborate Neo-Baroque decoration” and “building of considerable architectural significance” is protected as a Category 1 Listed Historic Place.

Its latest owner is one of the city’s young property tycoons, Ben Cook. He bought it for an undisclosed sum in 2016. The main tenant is the upmarket Augustus Bistro restaurant.

Till the mid 1970s, St Mary’s Bay didn’t really have its own identity – it was always regarded as part of Ponsonby. But the extraordinary infrastructure development at the end of St Mary’s Road – the motorway leading to the Harbour Bridge and then the huge Westhaven Marina – meant locals needed a voice to prevent their neighbourhood being overrun. So the St Mary’s Bay Association came into being in 1975 and has lobbied hard for the area ever since.

The suburb is now one of Auckland’s most desirable places to live. It was the second in the city, after neighbouring Herne Bay, to have an average property value of $2 million. Sales at $4, $5 and $6 million are not uncommon.

So despite testing his patience with all those sins of the flesh and abuse of the body, it seems God is still smiling on St Mary’s Bay, more than 170 years after he first gave the area his blessing.